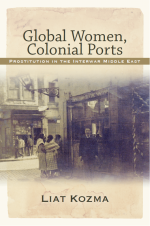 Combines analysis of transnational prostitution and traffic in women with a social history of the League of Nations and interwar globalization.

Global Women, Colonial Ports is a transnational history of state-regulated prostitution in the Middle East and North Africa between the two world wars. Beginning with international efforts to eradicate traffic in women and children, Liat Kozma examines French and British policies regarding local and foreign prostitutes in the region and shows how these policies affected and interacted with global migration routes of prostitutes and procurers. In so doing, she reveals how colonial domination mediated global mobility of people, practices, and ideas. Kozma weaves together the perspectives of colonial and local feminists with those of medical doctors, demonstrating that debates on prostitution were globalized and that transnational networks of knowledge and activism existed. She also explores the League of Nations’ involvement in this social issue. As a history of the Middle East, the book joins recent scholarship on modern globalization and the integration of the region in global economic, activist, social, and religious interconnectedness.

“Meticulously researched, carefully written, and compellingly argued, this book breaks new ground. Kozma looks across the region at a fascinating social issue—regulated prostitution—tying it to global concerns. Moving adroitly from international law and urban planning to migration, disease, and abolition, she helps craft a new understanding of mobility in the interwar period. This is transnational history at its best.” — Beth Baron, author of The Orphan Scandal: Christian Missionaries and the Rise of the Muslim Brotherhood