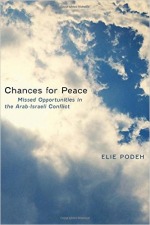 Drawing on a newly developed theoretical definition of “missed opportunity,” Chances for Peace uses extensive sources in English, Hebrew, and Arabic to systematically measure the potentiality levels of opportunity across some ninety years of attempted negotiations in the Arab-Israeli conflict. With enlightening revelations that defy conventional wisdom, this study provides a balanced account of the most significant attempts to forge peace, initiated by the world’s superpowers, the Arabs (including the Palestinians), and Israel. From Arab-Zionist negotiations at the end of World War I to the subsequent partition, the aftermath of the 1967 War and the Sadat Initiative, and numerous agreements throughout the 1980s and 1990s, concluding with the Annapolis Conference in 2007 and the Abu Mazen-Olmert talks in 2008, pioneering scholar Elie Podeh uses empirical criteria and diverse secondary sources to assess the protagonists’ roles at more than two dozen key junctures.

A resource that brings together historiography, political science, and the practice of peace negotiation, Podeh’s insightful exploration also showcases opportunities that were not missed. Three agreements in particular (Israeli-Egyptian, 1979; Israeli-Lebanese, 1983; and Israeli-Jordanian, 1994) illuminate important variables for forging new paths to successful negotiation. By applying his framework to a broad range of power brokers and time periods, Podeh also sheds light on numerous incidents that contradict official narratives. This unique approach is poised to reshape the realm of conflict resolution.